On average in the UK, subclinical milk fever is affecting up to 75% of the herd. It’s unrecognisable and generally remains untreated, as a consequence it's the gateway to other metabolic diseases and ultimately an early cull cow.

Clinical milk fever incidence is currently running close to the 10% mark in UK dairy herds. It's costing approximately £200 per cow, while subclinical milk fever can affect up to 75% of the herd, it’s unrecognisable and generally remains untreated.

Hypocalcaemia or milk fever in dairy cows can be defined as situations where the blood calcium concentration is below normal (normal plasma Ca being 2.1-2.8 mmol/l). Cows suffering from hypocalcaemia can be divided into 2 groups:

Milk fever – both clinical and subclinical, occurs at calving, which is probably the most stressful time of the cow’s life. She will be changing environment, diet and groups all at the same time as well as undergoing a massive physical challenge. Milk fever incidents also increase with the number of lactations.

That’s not all. Cows suffering from milk fever are between four and nine times more likely to suffer from a miscellany of other metabolic orders, many of which are related to each other. They each come with a significant price tag not only in treatment and vet costs, but also with losses from future milk and fertility delays. Cow suffering milk fever are likely to have increased risks:

Even a slight reduction from normal calcium levels can significantly impact production and profitability. A small decrease in blood calcium can increase the risk of:

During the final six to eight weeks of pregnancy, most dry cow diets contain more calcium than is required, consequently the cow is only passively absorbing calcium. However, at calving there is a sudden demand for calcium for colostrum production and also for muscle contractions relating to calving and udder function, and the required level simply cannot be met by passive absorption. Active calcium absorption and mobilisation is required, yet it takes between 24 and 48 hours for her to change to active absorption, consequently there is always a drop in calcium levels around calving.

The consequences of low blood calcium, can be seen in the following diagram showing how it can be a gateway to other metabolic diseases and ultimately death. 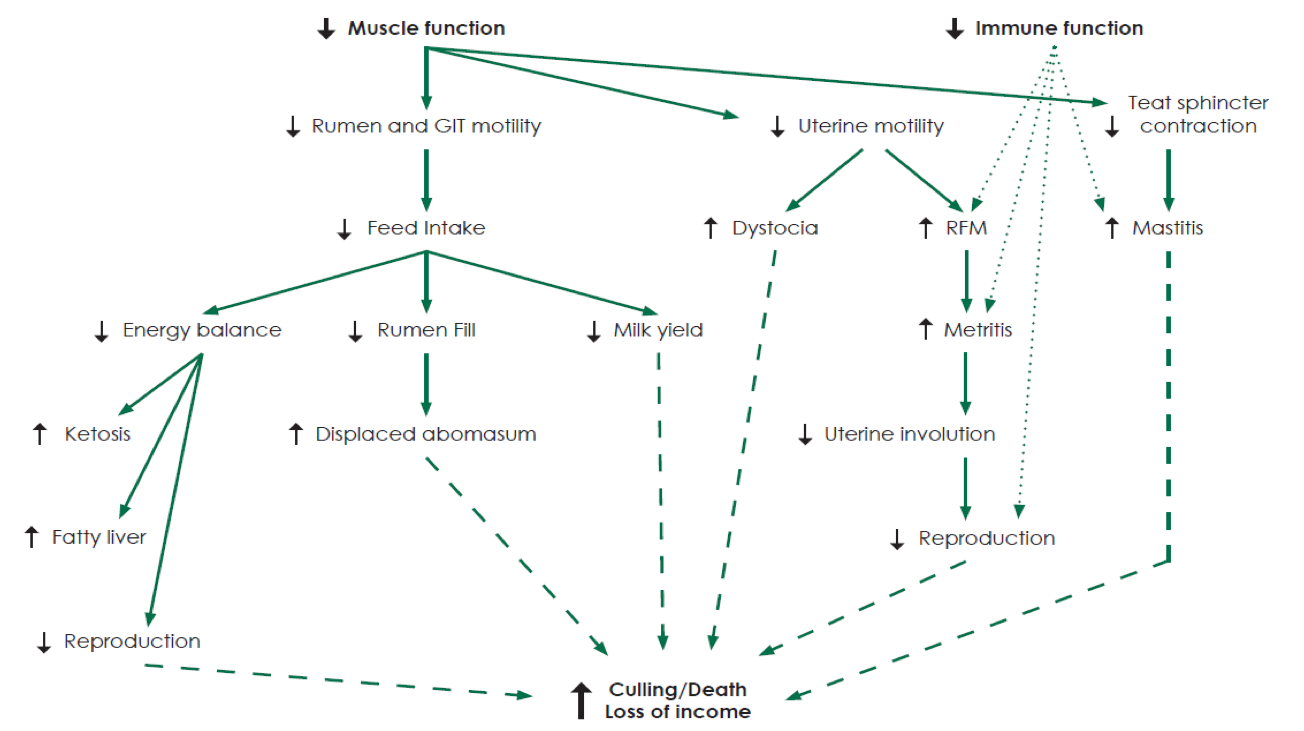 Intravenous calcium will give a quick response to a clinical case and often save a cow’s life, however it doesn’t reduce the problem; IV calcium, may cause fatal cardiac problems and perhaps most significantly, shut down the cow’s own ability to mobilise the calcium she requires at this critical time. Cows treated with IV calcium often suffer a hypocalcaemic relapse 12 to 18 hours later.

Subcutaneous and oral calcium supplementations can be given around calving but are often not given as required and there is only a small amount of absorption. Energy drenches can be used to provide a quick response to energy deficiency. Neither of these offer a preventative effect and both are poor for reducing subclinical hypocalcaemia/ milk fever.

Since both clinical and subclinical milk fever and consequential metabolic disorders are mainly related to the cow’s diet, the challenge is to maintain her feed intake and rumen balance around and shortly after calving. However, it is important to manage the cow carefully during the entire dry period to minimise fat deposition in the liver, maximise liver health and therefore also improve ovarian development for the next lactation and fertility cycle.

For further information on milk fever, clinical or subclinical or to find out more about X-Zelit. Please contact us on 015242 63139.

Thank you to all our #BritishFarmers producing top quality food for the nation! We are proud to support our farming… https://t.co/INDpPCKesE | Advanced Ruminant Nutrition 2 days, 18 hours ago

It's a beautiful sunny day today, but the effect of heat stress could be effecting fertility and yields... https://t.co/I8NLIZwfHn | Advanced Ruminant Nutrition 1 week, 1 day ago

RT @GrasscheckGB: Bringing in silage aftermaths can be a good option to extend the rotation and help to meet the extra grass demand w… https://t.co/8u6mvZQpuV | Advanced Ruminant Nutrition 1 week, 2 days ago

Heat stress may still be affecting your cows, even with these milder temperatures in the UK this month... https://t.co/sp7uVOiRW1 | Advanced Ruminant Nutrition 2 weeks, 3 days ago