Eoghan Mullery discusses the importance of managing cows on a robotic system - balancing nutrition, the robot settings and cow health. 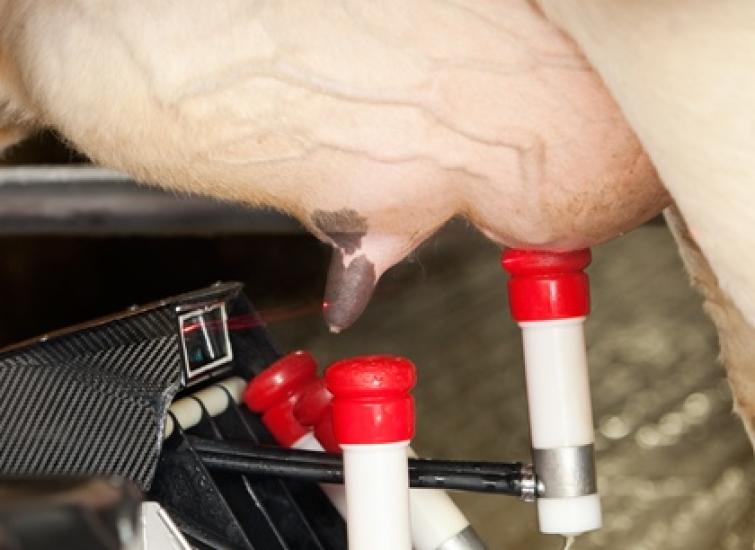 Robotic milking systems constitute 35% of new milking systems being purchased and with an estimated 10% of UK farms already using them, it’s well known that this is a fast-growing industry. With this in mind, Eoghan Mullery emphasises management expertise is needed to support farmers on AMS.

“Rather than relying purely on the standard robot set up, the careful management of the cows, including their nutrition, environment, health, the team around them, as well as the management of the robot settings is the key to success.”

The team at Advanced Robot have the expertise and proven results, supporting farms across the UK. They recently launched their Advanced Robot division, borne out of experience of working with robot farms, but also from a passion to make them succeed. Eoghan stresses that there is sometimes a misconception within the industry that because the robots promote a more natural flow and behaviour for the cows, there is less intervention needed from the farmer. Whilst this is true from a time saving point of view, if the system isn’t managed properly then farms will see milk yields and quality dropping. Every farm is different, so there isn’t one catch all solution. However, what is true for every farm on an AMS, is when relying on cows to be voluntarily milked, health issues have a much greater impact on productivity.

Eoghan continues, “We regularly find that dairy farms haven’t always had the support in managing these systems and have tried to use robot settings from another farm in a bid to solve their own issues. Often, this only serves to make problems worse.”

Three of the most common problems highlighted by a robotic milking system are getting the nutritional balance correct, metabolic issues in transition cows and lameness.

Eoghan points out that, “Nutritional imbalances are a common problem with robotic herds. Often traditional feeding approaches are taken that are suitable for the parlour but not for the robotic system. With robots, the full picture needs to be considered and this includes assessing the robot settings as well as the health and management of the cow.”

Balancing the diet both in and out of robot is critical to producing profitable milk and ensuring optimum visits. On most farms this balance needs to be struck between the mixed ration and in parlour feed for the robot but on others there may also be out of parlour feed options or grazing gates.

Eoghan comments, “Our experience has shown that nutrition is a key starting point and the foundation for success. Often, production gains can be made in relatively short periods of time through improved rumen health, which sets the cows up for further long-term success.”

Eoghan works with Robert and Craig Sloan from Shawsmuir family farm in Dumfries and Galloway. They milk 265 Holstein cows through 4 robots. Getting the nutrition right before and after the robot installation was key.

Robert comments, “The cows were milking well in the parlour and Eoghan worked with us to re-balance the diets to suit the robotic milking system. The impact of getting the nutrition right meant the cows have continued to do well and have increased production using the robots. Eoghan and his team had a clear understanding of how the whole system needs to work, from the cow and her health right through to robot settings. The cows are healthy and performance is terrific”

Transition Cows are another focus area for robotic milking systems. Eoghan Mullery goes on to state, “In a parlour system milking 2 times a day, a cow will reach peak production, between days 70 - 90. On a robotic system, because she may be milked between 3 and 5 times a day, she could hit peak production nearer to 40-50 days in milk.”  The cow on a robotic system is therefore under much more pressure in that initial transition period and if there is a metabolic problem, it will be amplified much quicker. So, the key in the robotic system is a heavier focus on prevention.

Eoghan focused on transition cows at Andrew Timperon’s family farm in Carlisle. This high producing herd of 220 milkers, needed nutritional consistency in the dry period. High energy and also consistent calcium levels were required to get the cows set up for milking.

Andrew comments, “The team came out and assessed the herd and the robot data. Small tweaks were suggested to get the cows back to optimum health. Dry cows were fed X-Zelit, which gave them the energy and calcium balance needed through calving and the first lactation. It’s only been months but cow health, yields and returns have all increased.”

Eoghan comments that preventing metabolic issues through the dry period can have a massive impact on costs. The table below shows the costs of metabolic disorders, which is amplified on a robotic herd, demonstrates a clear need to focus on this area.

Like conventional herds, robotic herds can still be affected by lameness, but again this is amplified. Eoghan explains, “The single biggest change for a cow moving onto robots is she’s no longer ‘herded’ into a parlour collect yard. To effectively milk ‘voluntarily’ she will need to be confident on her feet. If she’s not, she simply won’t put herself in an unfamiliar situation - meaning no visits and no milk!”

Digital dermatitis and/or lameness have been shown to dramatically reduce cow visits to the robot. Therefore, an effective digital dermatitis control plan should be implemented pre robots, with a lower tolerance level accepted compared to a parlour herd. Consideration should also be given to mineralisation, as this is an effective way to improve foot health.

The team work closely with Zinpro using their FirstStep® programme in preventing lameness in robot herds. Dr Adam Geiger, one of Zinpro’s Dairy Research and Nutritional Services team, comments, “Manure handling options also need to be considered. In line with labour reduction objectives, robotic units often have slatted floors to allow efficient manure removal. However, the size of the slots in slatted floors tend to be much wider than the <2 cm groove size recommended in concrete flooring, increasing the risk of trauma on the claw and skin which may result in white line disease.”

“Additionally, field data has shown that slatted floors may have excessive ammonia concentrations near the slots. High ammonia levels can compromise skin integrity near the hoof, which combined with wet conditions can significantly increase the likelihood of digital dermatitis.”

Adam also referenced a new study published in the Journal of Dairy Science that observed on average, lame cows had 0.3 milkings/d fewer than healthy cows. They were also 2.2 times more likely to be fetched and produced 1.6 kg/d less milk compared to healthy herd mates. With a lameness level of 30% this, for a herd of 250 cows, has an annual income loss in the region of £12,500!

Eoghan concluded by stating, “For many clients installing a robotic system can pay them back in dividends provided that they take the right advice and manage the system as just that – a robotic milking system. So many problems occur when traditional management techniques and nutrition suitable for the parlour continue.  A fresh approach is needed for what is a significant investment for farmers.”

We are now on Instagram! 📸 Take a look at our youngest member of the team and follow her on her journey to further… https://t.co/ALkytoVCDW | Advanced Ruminant Nutrition 1 week, 4 days ago

Happy #worldmilkday here's to a glass of the good stuff! Proud to #backbritishfarming and support our milk producin… https://t.co/Gz8HZqlJ51 | Advanced Ruminant Nutrition 2 weeks, 4 days ago