Supplementing maiden heifers with specific minerals has led to a 65% reduction in digital dermatitis according to latest international research findings.

Digital dermatitis incidence continues to run high; with at least 70% of all herds infected whilst 40% of cows within those herds suffer from the infection despite farmers introducing strategies featuring persistent foot bathing, trimming, early treatment and record keeping.

Now the focus is turning to pre-calved heifers. They experience many periods of metabolic and social challenge through their growing life which has a significant impact on their susceptibility to infectious lesions, such as digital dermatitis. In fact incidences have been found in cattle as young as eight to ten months of age and mature cattle may have first been infected during the rearing phase. Introducing a new prevention plan which focuses on the heifer replacements would appear to offer a solution towards arresting the condition, according to the latest US trial results and field observations.

A package of specifically formulated trace minerals fed to maiden heifers to improve skin health and subsequently provide better protection has reduced the incidence of digital dermatitis by at least 65%, after these heifers entered the herd. The results were dependent on those specific minerals being fed prior to the heifers suffering any infectious lesion. The initial independent trials carried out at the University of Wisconsin featured thirty 10 month old animals suffering from digital dermatitis in the early stages. Half acted as a control with standard treatment whilst the other half was treated with the formulated trace mineral package, Availa Plus. The trial was carried out over a 62 day period.

The control animals in this study progressed from early stage to acute stage digital dermatitis lesions approximately 10 to 14 days faster than those treated with the formulated trace mineral package. The treated animals also had smaller, less active lesions than the control animals and thereby incidence was significantly reduced. Field evaluations followed with a commercial dairy unit in Wisconsin. Maiden heifers were split into two groups, a control with standard treatment and a group fed the same formulated trace minerals, from breeding until confirmed pregnant 49 days later; the treated group demonstrated a 50% reduction in digital dermatitis lesions compared with the control heifers. Added together, the official trial and field evaluations resulted in an average 65% reduction in digital dermatitis lesions.

Field evaluations  were then extended to 16 different US farms where the same formulated trace minerals were fed for 150 days. The net results were that 87% of farms noted a reduction in digital dermatitis, varying from 30% to 85%. The same field evaluations have now been replicated on five European dairy units resulting in similar trends.

Digital dermatitis – The Cause 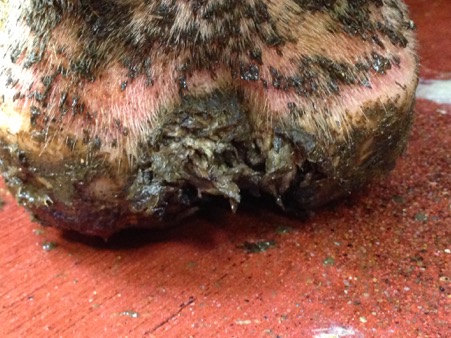 Three key factors cause the spread of, and increase the incidence of, digital dermatitis - a moist environment, skin damage and the prevalence of bacteria known as treponema. Treponemes can be found on healthy skin, but they need damaged skin to invade along with moisture.

Skin is made up of many cells in its different layers. The epidermis, dermis and subcutis all contain cells that produce keratin, immune cells, pigment cells, receptor cells and basal cells within which there are 600 enzymes that work to help maintain its health, productivity and a local active immune system. Many of these enzymes need zinc to work effectively.

When the treponemes enter the skin, they migrate down the intercellular spaces into deeper layers of the skin where skin integrity is weak. The US trial findings concluded that optimising the link strength between cells helped skin health; zinc along with the balance of trace minerals were major contributors.

Copper is required for antibody development and lymphocyte replication, removal of oxygen free radicals and is anti-inflammatory. Excessive copper will reduce productivity.

Manganese removes free radicals produced by immune cells, is involved in wound healing and enhances the killing ability of macrophages within non-specific immunity.

Iodine enhances cell chemotaxis, phagocytosis and killing ability which is the icing on the cake for immunity.

Finally, stress also has a part to play; increased cortisol which is released during periods of stress reduces trace mineral retention. Recovery after acute stress has been found to be quicker with certain mineral supplementations.

Introducing maiden heifers to the correctly formulated mineral supplementation should become part of dairy farmers' digital dermatitis prevention strategy if UK herds are to reduce the incidence and prevalence of this costly, painful disease.

RT @dairyuk: As well as being delicious, milk is a source of vitamin B12. Vitamin B12 helps to make red blood cells, which carry… https://t.co/uBNNHxvTPV | Advanced Ruminant Nutrition 15 hours, 57 minutes ago

RT @TomYoungs87: Do you want climate-friendly food that is produced by people you can trust in a way that cares for animals? Take ac… https://t.co/5GMfueDro8 | Advanced Ruminant Nutrition 16 hours, 14 minutes ago

Richard Bainbridge talks about utilising homegrown forage and making the most of what's in the marketplace to balan… https://t.co/Bakx6SLkNJ | Advanced Ruminant Nutrition 6 days, 15 hours ago