A Herefordshire dairy farmer and his nutritionist are setting new and challenging targets for producing milk from forage from high yielding dairy cows. British Dairying reports. 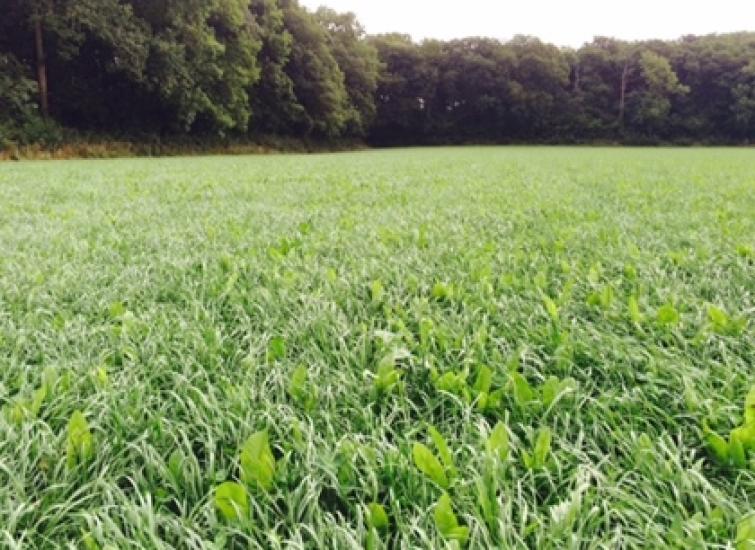 According to nutritionist Rob Watkins of Advanced Ruminant Nutrition it's entirely feasible. He has a lot of experience growing and feeding forages under pretty much all conditions and he's effectively sticking his reputation on the line by setting 4,000 litres as a target for the well-known dairy unit of farmer Henry Lewis, at Tack Farm, Bromyard.

The farm currently produces 2,970 litres from forage, but Rob already has one herd approaching 4,000 litres at 10,880 litres sold, so sees no reason why it can't be done. If he succeeds - and the farm isn't in a good area for super-quality bumper maize crops every year - then it will surely set a new bench-mark for high output herds and what can be achieved from forage.

With yields at that 11,000 litres level on three times a day milking, the 750-acre Tack Farm is a classic high input, high output enterprise. The problem, though, was that the high input element was getting too high in relation to the milk price. "We couldn't go on as we were as milk prices fell", says Henry. "The feed bill was too high, the margins weren't there and we had to do something different."

Reducing milk production wasn't an attractive option, but revamping the nutrition to deliver the same output at a lower cost clearly was. Back in January 2015, Henry and his herd manager Mark Lewis duly invited in nutritionist Bryn Davies and his Advanced Ruminant Nutrition team to hear what they could do, and a plan was put together to deliver on the farm's goals.

It was agreed that Bryn would concentrate on the overall nutrition and cow health and visit once a month, while nutritionist and forage expert Rob Watkins would be the main boots on the ground and would visit once a week. He would also be charged with getting the quality of the forage that Bryn wanted for the diets.

When Rob told Henry he wanted to get as much milk out of the grass that he did from his maize, and increase milk from forage to 35%, it sealed the deal - they were challenges Henry could not ignore (even if he didn't actually believe him!).

"I like new thinking and ideals," says Henry. "If someone says something can't be done I want to prove them wrong."

Rob and Bryn duly started work on the farm back in February last year.

The first move they made was a switch back from blends to straights in order to immediately cut costs and have greater control of the daily feed inputs.

The next move was to replace what Rob calls "sticking plaster" nutritional additives and bought in bulk moist feeds with better quality feeds the farm could produce itself, and to present the diet better. With the land being border-line for maize, and the cows not performing on wholecrop wheat, the solution had to lie in making better quality grass silage.

Although Henry is in the top 5% of silage makers in the country, and consistently makes great quality forage, Rob thought the farm could do better by growing better grass varieties and forage mixes.

"The target for a farm like this should be to get grass forages analysing at 11.5 to 12 ME, with 19% protein on average across four or five cuts," explains Rob. "And yet Tack Farm was only doing around 11 ME and 14% protein for the first cut. I work with an organic farmer nearby who gets the former, so why can't this one?"

The main objective of the new leys was to get higher energy and protein levels for the third and fourth cuts, because the quality gap between the first two cuts of silage, and the last two, was too wide for Rob's liking to achieve the new targets.

Nevertheless the jury is still out with Henry on the chicory, and 170 acres of IRG and clover has been sown for this year's silage.

The next part of the plan was to implement new ration regimes and management protocols for the milkers and the dry cows, starting with the latter ones first. "When we started we were treating symptoms, not the problems. We had a lot of over-fat cows so we went back to the basics of the diet to give consistency in all of the dietary parameters, including energy, protein, chop length and dietary presentation so we always give them a 45% dry matter, well mixed diet.

"And it worked. The dry cows now always eat around 13+kg DM per day; fresh cow health is in a different league and we're getting far fewer problems. The number of fat cows has fallen markedly and we haven't had a DA since May."

Herd manager Mark Lewis concurs: "After a cow calves we used to have to give her two calcium boluses and a fresh cow drench but now we hardly do anything but give her feed," he explains. "And they eat straight away. It's very refreshing to see."

This is now having a significant impact on reducing vet costs.

Changes to the milkers diet saw the concentrate level drop from 61%, down to 48%, lifting the forage to 52% of the total dry matter intake (DMI). They also introduced a special ARN "mash", which uses water and whey permeate to mix the dry premix into a moist premix. This sticks to the forages and helps reduce sorting.

The fresh calved cows get the same diet with the exception of fresh hay and a specific glucogenic premix called Transition Energy.

The diet also includes a new innovative product from Advanced Nutrition called Advanced Fusion. This filled the second brief from Henry to Advanced Nutrition - to put in place cash-saving dairy farm management strategies immediately - and ones that didn't involve heaps of money, which didn't compromise milk yield or solids, fertility or cow health, and which didn't create additional work.

"What we did was to premix a product off-site that has all the diet's high value, low inclusion ingredients such as Megalac, vitamins and minerals, rumen enhancers such as Progut and the like in it," explains Rob.

"We then looked at each product and made sure were using the most efficient source - an example being Mag 12 instead of Magenesium Oxide which is much more efficient.

"This is all delivered in a single tote bag rather than the ingredients coming individually and separately."

The product is made by Devenish Nutrition in a food-grade factory in Widnes, and can be manufactured to Advanced Nutrition’s specifications. Technology used in the plant minimises the heat generation that the materials are subjected to as they are being transported around the factory, and which can affect the quality of heat sensitive products like fats.

"From a practical point of view Advanced Fusion cuts the number of pallets and bags delivered and storage costs, and reduces the amount of rubbish on the farm plus the paperwork to account for it all. From a nutritional point of view it also cuts the time it takes to load the feeder wagon, and improves feeding accuracy by better dispersion, as well as protecting raw material usage."

That's because there is normally inaccuracy rate of 1% to 2% when filling a feeder wagon for each raw material used, even on very efficient farms. So if four to five separate materials are added there could be a combined inefficiency rate of 8 to 10%.

If all the specialist raw materials come pre-mixed in a single bag, which is ready to go straight in the mixer, then the wastage rate is just 1 to 2%. Rob estimates that the use of the single bag Advanced Fusion approach saves the farm around 5p per cow per day - effectively £1,000 a month.

So far so good

It is, says Henry, so far so good with all the changes. The diet consistency is good, the cows are milking well, with even 38 litre cows hitting the 3.3% protein and 4% fat targets required to maximise his Arla milk price.

"Dairying is all about doing the simple things consistently well. Mark and my team area already very good at that but we always have to strive to be better, and to push the boundaries of what is deemed possible."

"That's what we are doing now with the forages and the feed. We couldn't carry on as we were with ever higher feed bills and lower milk prices and we need to get more self-sufficient and produce more milk from our own resources now. We made a good start last year, and this year should be even better."

"Whether we can ever get to 4,000 litres from forage I don't know - but it's certainly a good target to aim for," he concludes.

Just 1 day to go until the Blythbridge Holsteins Open Day on Thursday 12th May. We look forward to seeing you there… https://t.co/mxofwlnI4I | Advanced Ruminant Nutrition 1 week, 4 days ago