Multi-cut helped James Francis to make considerably higher quality silage last year - yield from forage increased from 10% leading to the herd taking 35% milk from forage which has led him without hesitation, to place the practice firmly on his unit’s agenda this coming season and to take even more milk from forage. 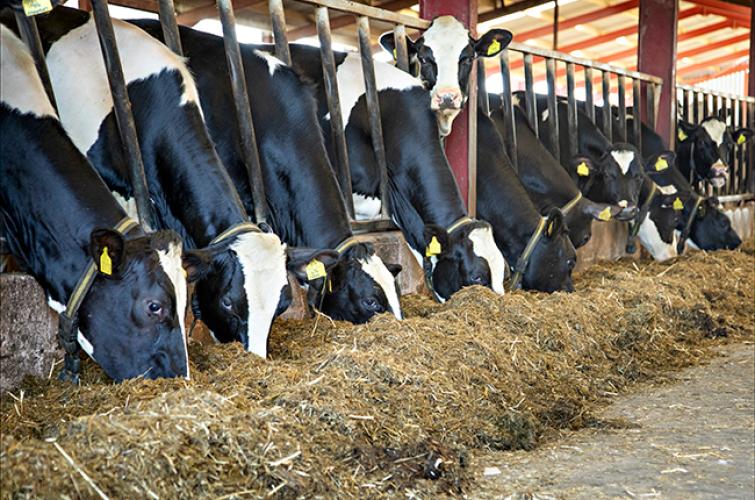 “The thought of moving on from three cuts to making four or even five cuts from some fields was initially daunting and I anticipated it would be a lot more expensive, however the whole process worked out smoothly, it didn’t cost crazy amounts of money, and the cost benefits are clear to see,” he explains. See table 1.

“In fact, multi-cut combined with better grazing management has been fundamental towards maintaining the unit’s profitability. We used to feed a 60:40 grass maize silage mix, and bought in locally grown maize silage, however due to the logistical issues of carting and storing the maize, plus cost, it led us to change the system two years ago for a sole grass based diet,” says James who is a member of the Co-op Dairy Farming Group which requires the herd to have access to grazing for a minimum 150 days of lactation.

Farm consultant, Rob Watkins from Advanced Nutrition explains: “James has proved that it’s possible to improve net profit from the unit’s own resources by taking more milk from forage without having to accept lower milk yield as a trade-off.” Average herd yield has increased in two years by 2,000 litres to 9,500 litres and milk from forage has risen from 10%, 750 litres to 35%, 3,325 litres, whilst higher energy and protein grass silage has enabled him to maintain concentrate fed at 0.325kg/litre. In addition, conception rate has improved from 37% to 44%. This year’s target is to step up total yield from forage to 40%.

“Forage making is a unique process to each farm and each year,” says Rob. “Success is down to having a plan. We established the amount of forage James needed for the winter housing period in terms of stock numbers, quantity per head and quality and then set targets, tonnage and quality to be harvested.

“Sheep are overwintered on the unit to take off winter growth and dead leaf, and stimulate tillering. A date is set for sheep to leave the farm in February based on growth rates and average farm cover. Once they leave in February, we calculated the total cover available, for grazing and eventually for conservation.

“Slurry application was based on weather and ground condition as part of the total nutrient budget. This included a proportion of the nitrogen as fertilizer. A traditional splash plate slurry applicator was replaced with a trailed shoe to reduce slurry impact on the leaf surface.”

First cut was key, James explains. “We went approximately three weeks earlier than usual – the leaf had a bigger surface area and what amounted to a bigger percentage of leaf in the sward with less stem..

“So how did we know when to cut? As soon as each plant within the ryegrass swards was supporting three emerged leaves. You can’t wait any longer, once the fourth leaf emerges, another leaf dies, the plant’s energy levels fall and you start losing quality.

“Wilting time was set based on the weather and ground conditions, any time between 24 to 48 hours. We aimed for 34% to 36% DM in the clamp, so to avoid the crop getting too dry, we became conscious of chop length and reduced it to 13mm to achieve a higher density in the clamp. We also swapped additive for one that would give a faster and more stable fermentation, and we consolidated the clamp for the first time with a silage compactor to achieve much better compaction. Our target was 800kg/m3 to 920kg/m3.

“We went on to allow a 28 to 30 day interval between each of the next cuts; too late or too short and the sward would take longer to recover.”

He adds: “Getting the contractors on board for the first and subsequent cuts wasn’t an issue; we initially agreed a plan and checked they understood that arriving early in the season was key. We worked with them, made sure the trailers didn’t come in too quickly and they stuck to our brief.”

Just 1 day to go until the Blythbridge Holsteins Open Day on Thursday 12th May. We look forward to seeing you there… https://t.co/mxofwlnI4I | Advanced Ruminant Nutrition 1 week, 4 days ago